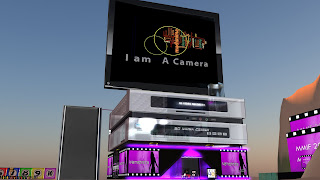 Our weekly machinima meetings are always different, it often depends on the people that come and the subjects they bring with them.

Often we show each other our new work, and sometimes even ask for feedback. We had guest speakers, machinima classes, a Q & A about lag, nifty discussions about copyright issues, we talked about branding and where to post films, we talked about edit, music and voice over talent, acting, animations, foley - and it seems like every week there are more and new subjects to discuss.

I think it is time to create some MM-blogs, as people are forever asking what we discussed at last weeks meeting. 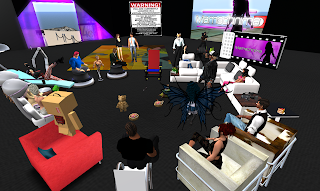 Both MM meetings had one subject in common; the "wish-list" for a machinima viewer.

A few days before the meeting, Toxic Menges and myself had a meeting with Kim and Rhett Linden. Amongst many things we discussed the difference between the current Lindenlab and 3rd Party viewers.

We use different viewers now for different purposes, forever switching between viewers - (I use 7 viewers!!!) cluttering our precious desktop space with icons, and wishing that all features a machinimatographer needs would be available in just one viewer.

I now use Kirstens viewer for depth of field, Firestorm for shadows, Dale's for anaglyph, Phoenix for windlights, V2 for media on a prim, the meshviewer for ...uhh mesh, Imprudence cos I just like it.
Our suggestion for a machinima-viewer was welcomed as a good idea, but not likely to happen. Rhett Linden asked us what our thoughts were on features we would need, and we agreed to do a survey amongst the MM members.

Here are suggestions that ppl came up with:

* Good dof (*Depth of Field) - concurs with this point: https://jira.secondlife.com/browse/CTS-437?page=com.atlassian.jira.plugin.system.issuetabpanels%3Acomment-tabpanel&focusedCommentId=234791#comment-234791

* Auto screen size - in the pull down menu in Preferences>Graphics, the sizes are not really useful to machinima makers - 1280x720 would be a good option, as would 1080 x 1920, so we can film in HD easily. Full Screen was a great option in v1.23, but that has been removed in v2.xx and now you have to manually resize in order to be able to film at 1080

* Easy controls to hide things such as avas/clouds instead of being hidden in a massive hierarchy.

* Ability to derender all avas except your own/ones you specify

* Record camera moves to perform multiple passes of same scene - this is an experimental option in the viewer at the moment, or at least it was, and can be very useful for filming from multiple POV.

* Machinima tab - Kirsten viewer has a machinima tab http://www.kirstensviewer.com/Blog/134.html this is an xml tab that includes commonly used features. We did speak at the Machinima Mondays meeting about the ability to include things like zoomtime form the debug menu on that drop down - but it appears that that would involve delving under the hood of the viewer a bit more. Zoomtime is a GREAT tool for filmers and it's hidden deep in debug menu.

* More than one parcel media stream, not reliant on the shared media tech (I did point out that sub dividing media was a possibility here, and also that's more of a server point that viewer)

* Default animation improvements/different speeds - There was a call from Linden Lab to hire one of the inworld animation developers to get them to make a new default walk, any idea what happened with that? It would be great if we could control walking speed of not only our own but other avatars.

* Slow motion avatars for all not just your own - there is an option in the advanced menu that allows slow motion animation, but this only works for the avatar being controlled - it would be good if all avatars could be viewed in slow motion when that option was activated.

* Animation Editor in world similar to Unity 3D's Unity calls their editor a cutscene editor. Think of it like scripting out the scene and pressing play to run through it - I am not familiar with this myself, but it sounds not unlike the puppeteering system that was being looked at by the Lab a few years ago.

* It used to be a feature of the viewer that you could record vid directly from the client. I was on a Mac for my first two years in SL, and this feature never worked on mac clients, but some did use it successfully. Would be GREAT to have this back.

* What about having functions based on genre (like have option for film noir)?

* Making use of more than 3 meg bandwidth

* Bespoke viewer which would use cloud computers - negating lag (hopeful!)

* Sound aspect in the viewer that gave us more control? Broader range of Equalization as well as volume?

* Ability to change infinity view to sand or other terrain so that things dont always look like you are on an island.

* Full moon and phases of the moon - the Lab used to replace the moon texture for special occasions - this would be a huge crowd pleaser aside form machinima!

* Nimble for Windlight - would love to see Nimble implemented to give depth and extra weather effects to windlight.

In addition to the above which are more viewer specific, these also came up:

** An infohub for machinima

** Case studies for machinima in commercial projects - in the Enterprise/Commercial info part of the sl.com website.


The suggestions/wishes on the above list are a good showcase of what our machinima community is about. Toxic and I welcome Rhett - who joined MachinimaMondays group - to take ideas from that list and implement them in LL viewer 2. Lets make this world a better place for machinima.... 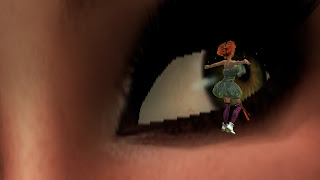 Next meeting - February 14, 2011 - will have a guest speaker at the 7 pm session: Goat Firethorn will do a session on computer hardware.

Ever wondered what to buy for your money? Which graphic card, processor, how much ram, is there a difference in harddrives, - ---- please come to SL and join the MachinimaMondays group, or contact Toxic Menges, Phaylen Fairchild or Chantal Harvey for an invite.
Posted by Chantal Harvey at 4:07 PM