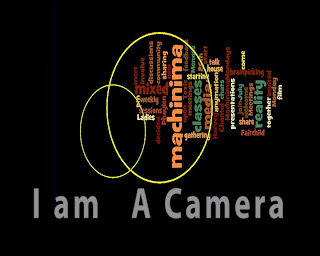 
3 Ladies in machinima have decided to start weekly machinima meetings, an open house gathering to which you are all invited.
It will involve presentations, classes, feedback sessions, discussions, chats, sharing & brainpicking.

So, you are more then welcome to come over and join us, 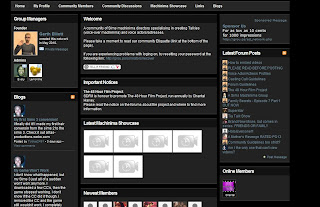 I am delighted to announce that Sims Directors and Film Makers has offered to promote the 48HFP for machinima.

I got a kind email from Garth Elliott, founder of the group, and I invite you all to take a look at this friendly community website. http://grou.ps/simiators/signin/warn/home

Lets connect our platforms and virtual worlds, and rock the 48HFP for machinima!
Posted by Chantal Harvey at 2:36 PM No comments:

I am happy and proud to inform you that the following VW/organisations have offered support:

winner ánd runner up will be screened at
http://www.machinima-expo.com/

The 48HFP filmmakers rules, as found on the website.

•The 48 Hour Film Project (48HFP) will occur in cities around the world on different weekends throughout the year.
•The 48 Hour Film Project will occur between a Friday 7pm local time and the following Sunday 7pm local time. This is the "Official 48 Hour Time Period". (Days of competition may vary in some countries.)
•The participating group/team must complete its film/video work in time to deliver it to a location to be announced, on Sunday by 7:30pm.
•Only works that meet the deadline will be officially part of the competition. All films received on Sunday (on-time and late) will be screened.
B. All creativity must take place during the "Official 48 Hour Time Period". Any creativity work in advance of the competition weekend is prohibited. Creative work includes, but is not limited to:

C. The only work to begin prior to the "Official 48 Hour Time Period" is:

D. All footage must be shot within the 48 hour time period of the project.

•No stock footage or footage shot or created at another time may be used.
•Animation and special effects are permitted, but must be created during the 48 hour time period. (Note: Stock footage as part of a special effect in a third party special effects program is permissible.)
•Still photographs are permitted, provided that the team has the rights to them. The photos do not need to be created during the 48 hour time period; however, stills created outside of the official 48 hour time period may not be used in sequence to create the illusion of motion.
E. Each participating group must have a representative at the official Kickoff Event of the 48 Hour Film Project.

•At the event, each group must submit a complete Team Leader's Agreement, signed by its team leader. (This form can be found on the 48 Hour Film Project website.) A team may not participate without submitting this agreement.
•Each group will choose the genre of its film in a random drawing.
•Teams will be given the option of relinquishing the genre selected in the drawing for a Wild Card genre. If opting for the Wild Card, teams may not go back to their original genre.
F. Each participating group will be assigned required elements that must appear in its film, such as a genre, a character, a prop and/or a line of dialogue.

•The required Character and Prop must be seen on-screen.
•The required Line of Dialogue must be used verbatim. It may be spoken, sung and/or written. It may be in any language, though if it is unclear that it is the required Line, there must be a translation.
•To qualify as an "Official 48 Hour Film," each group's film must be in the genre it selects and must contain all required elements within the official time limit and prior to the credits.
G. All cast and crew must be volunteers.

I. First Time Cities only: Each film must include a landmark (building, monument, etc.) or identifying characteristic (e.g., bus, city office) of the competition city. (Note: The landmark or characteristic must exist inside city limits.) This rule applies only the first time the 48HFP visits a city.

J. Participating groups are encouraged to work with a local composer and/or musicians to write and record music for the films. It is permissible for a participating group to use pre-recorded music; however the participating group must have the rights to any music used in its film and must provide releases for all music used. As with music, pre-recorded sound effects are allowed, but you must have rights to use them. Note: Song parodies (i.e., use of identifiable pre-existing compositions with new or altered lyrics or music) may not be included in the film without a signed release from the composition’s rights holder. This rule applies without regard to whether the song parody arguably constitutes "fair use" under US or international copyright law.

L. Credits at the end of each film are limited to a maximum of 60 seconds. The 60 seconds is considered additional to the length of the film, as stated in Rule K. (That is, a film may be 7 minutes long, with an additional 60 seconds of credits, for a total running time of 8 minutes.)

M. For the United States, Canada, Peru, and South Korea, the finished film/video must be in NTSC. For all other countries, it must be in PAL.

Unless otherwise instructed on your city page of the 48 Hour Film Project website, your film must be submitted on one of the following media:

•(preferred) a self-contained, SD, Quicktime file with no proprietary codecs on either:
- a data DVD, or
- a USB flash drive
•miniDV
•DVD
We recommend that each team submit two copies of the final film. If the Entry cannot be viewed on 48HFP equipment, it may be disqualified.

N. All films received on the evening of the deadline (on-time and late) will be screened, presuming they are eligible according to Rule R. To ensure the best screening of your film, please follow the instructions below, unless instructed differently by your City Producer:

•HD films must be down-converted to SD.
•Sound levels should be relatively even throughout the film. (If your film has uneven sound or sound that peaks, it may be modified to protect the playback equipment.)
•Note: Projection specs vary from theater to theater and are beyond the control of the 48HFP. If your film is very dark, it may be difficult to see in your theater.
O. Before the finished film begins, the tape should have:

Q. The Entrant must submit a Certification Statement with his/her completed Entry, certifying adherence to all Official Rules.

R. To be eligible for the Project, Entries must be the original work of the Entrant; must not infringe third-party's rights; must be suitable for publication (i.e., may not be obscene or indecent); must not contain obscene or pornographic material; may not contain defamatory statements about any person, company, organization or entity; may not invade privacy or other rights of any person, company or entity; may not in any other way violate applicable laws and regulations; and may not contain any copyrighted elements (other than as owned by the Entrant and/or 48HFP). Entries containing prohibited or inappropriate content as determined by the 48HFP, in its sole discretion, to be inappropriate will be disqualified. 48HFP reserves the right to make the final determination as to which Entries are eligible.

T. No Entries (media or documents) will be returned.

U. 48HFP and Project Parties may, in their sole discretion, disqualify Entries deemed to be inappropriate or otherwise non-compliant.

V. All certified "Official 48 Hour Films" are eligible to compete for the title of Best 48 Hour Film in its city.

W. All "Best of City" films are eligible to compete for title of Best 48 Hour Film 2010. Panels of independent judges will determine the winners.

X. The 48 Hour Film Project Organizers may add to or amend these rules at any time prior to the beginning of the 48 Hour time period.

Every second counts, when you have 48 hours to make a film!
Posted by Chantal Harvey at 7:20 PM No comments: 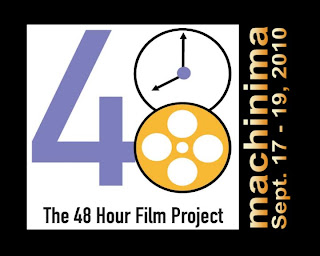 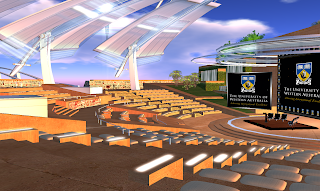 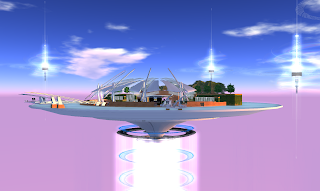 Today, Twinity ~ http://www.twinity.com/ ~has joined forces with the 48 Hour Film project for machinima.
All 48HFP machinima entries will be screened in Twinity too, after the contest - so many more people will be connected and see your work.We are hoping for many Twinity machinimatographers to join the contest!
Welcome Twinity!


Please join the 48 Hour Film Project group in Second Life, to get all updates and extra information.
To join Second Life (it is free) you go to: http://secondlife.com/
After creating an account and downloading the client, take a little time to explore, and please contact Chantal Harvey inworld, I will be happy to give a little tour and show you the theatre where the contest is hosted.(see images above).


The actual events are all held in Second life : http://slurl.com/secondlife/UWA/6/248/1638
Some dates to remember: (all times are sl/pacific times.

48 hour film project for machinima is back!!!!!

The 48 Hour Film Project, the oldest and biggest time filmmaking competition, is looking for machinima! In a wild, sleepless weekend, you and a team will make a movie--write, shoot, edit and score it. From scratch. In 48 hours. On Friday, September 17, you'll get a character, a prop, a line of dialogue and a genre, all to include in your movie. By Sunday, September 19, the movie must be complete. Each completed film is guaranteed a screening at UWA-BOSL theater in Second Life in the following week.


To be part of the 48HFP, register online at:


Registration costs $48 per team. Space is limited, so register today!


Meet other machinimatographers, spend 48 hours in intense movie making, have your film screened at the UWA-BOSL theater, and compete to represent machinima against the other 80 48HFP cities! Come on out and make a movie!

machinima@48hourfilm.com
Posted by Chantal Harvey at 10:28 PM No comments: